Scores of stone circles. I’ve written about them before. Too small to be hogan or tipi rings, wrong shape/size/place to be hunting blinds. (Though we did come upon a blind that overlooked a draw: U-shaped, right for one man to lie on his belly.)

The circles are very old. No idea what they can be if not for so-called “vision quests,” in the nature of “go out there and fast until you know your true name.” Who can tell? There was not one that didn’t have a view of Cabezón, the Ladrones, or the Sandias. All those peaks are sacred. 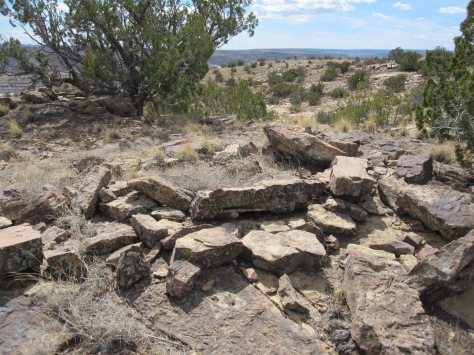 Most of them consist of a single course of unworked rocks in a ring five or six feet across, usually on a high place.  Because they are clearly ancient and the stones have been scattered it’s hard to say for sure, but most seem to have a gap that faces a distant landmark: a mountain, a volcanic plug. They’re too small to be hogan or teepee rings. A visiting archaeologist friend took one look and said, “Did they do vision quests in these parts?”

Quite possibly. The circles’ size, placement and ephemeral quality—ephemeral for stone—seem right for solitude, fasting, and waiting upon silence. I am deliberately vague about their location lest there be an influx of Native-wannabe vision questers; those who have a right to know where they are no doubt already do.

One ring was more horseshoe-shaped, built higher at the curve and sloping to an opening that may have faced the winter sunrise. Another was built on top of a seven-foot-tall yellow sandstone hoodoo just the right size for it. Its rocks were bright red.

From the western ridge of the syncline a pass looks out over Cabezón, shadowy and shadow-washed. Many ancient, rudimentary stone circles scatter their boulders on high points. Each may be the site of a vision quest; we can think of no other explanation. Below lie mineral springs. One is raised on its deposits, a breast whose nipple is a pool, perfectly round, green as an old penny.

As we walked back along the ridge, some small creature far down among the split rocks screamed at us: Squee! Squee! Squee! An ear-splitting insult that never stopped until we went away.

Warm sun, nippy wind. Socks full of stickers, had to stop every quarter mile to pick them out.

North of Stud Stallion Wash we crossed the pitted sandstone to the ridge. Tucked in a cliff face below a little ponderosa and above a cluster of dry tinajas—natural rain catchment tanks—we came upon what was probably a nineteenth-century sheepherder’s hole-up.

It was a smoke-blackened rock shelter partly enclosed by a stone windbreak. Cozy place. You could spread your skimpy bedroll behind the stone wall and look out over the wide saddle of the syncline with its mysterious stone circles and prehistoric deer-hunter meadows and, at night, a field of stars.

Betsy James On Writing, World-making, and Walking on Stone